skip to main | skip to sidebar

The Font Game for the iPhone and the iPod touch

Think you know your Arial from your Helvetica, your sans from your sans serifs? Then step up to the plate. With three levels of game play from the ease-yourself-in, ‘Somewhat Difficult’ through to the incredibly challenging ‘Exceedingly Difficult’, there’s lots of fun to be had for novices and typographic experts alike. Check out the Beautifully designed Font Game by John Boardley, Justin Stahl and Kari Kari Pätilä. (via swissmiss)
Posted by Zana Fauzi at 1:14 PM 1 comment:

typo/graphic - a collection of typographic posters to feast your eyes.
Posted by Zana Fauzi at 7:33 PM No comments:

How clever is this Serif Tote?! (via swissmiss)
Posted by Zana Fauzi at 3:13 PM 1 comment:

A friend says the chair does not look uncomfortable but I have a huge thought bubble on my head that says WANT!
Posted by Zana Fauzi at 2:43 PM 4 comments:

Oh look, a store of letters!

Kidimo is a new shop online that sells vintage shop signs.
Posted by Zana Fauzi at 9:22 PM No comments:

Even Hitler flips on shitty fonts

You have most likely seen one of the many hilariously subtitled versions of the movie, Downfall, where Adolf Hitler goes on a rant in German. This latest version looks at what happens when the subtitle guy gets a CD with 500 cheap fonts. (via quipsologies)
Posted by Zana Fauzi at 1:52 PM No comments: 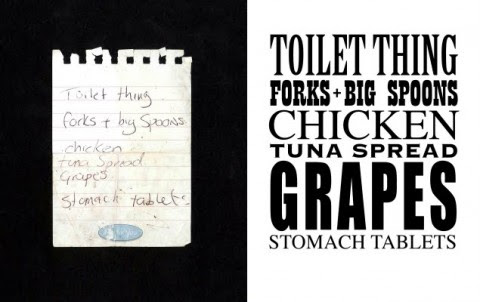 An ode to the @ and the ampersand

Richard Wilbur, “&”
From The Beautiful Changes and Other Poems (1947):
A slopeshouldered shape from scurrying burdens
Backward and forth, or perhaps a lyre
Or a clef wrung wry in tuning untunable tones
Or a knot for tugging an out-of-hand.
Vine to the trellis in clerical gardens:
Sweetness & light, ice & fire,
Nature & art have dissocketed all your bones,
Porter, poor pander ampersand. (via The Ampersand)
@
Like the whorl of an out-of-this-world ear that had been lent
to an oak-gall wasp by a tenth century Irish monk
who would hold out oak-gall ink against the predicament
in which he found himself…
Like the ever-unfolding trunk
of the elephant in the room that gives such a bad vibe
it vies with your old hippie girlfriend who once lent such weight
to any argument to which you feared she might subscribe,
including her insistence we abbreviate
our most promising rlshps…
Like the scrolled-down tail
of a Capuchin monkey drawing on its inner strengths
as it hammers short-sighted snail against short-sighted snail
that has nonetheless gone to extraordinary lengths…
Like the tapeworm swallowed by a hippie who was once fat
but is now kind of bummed out you've lost track of where she's at. (via Design Observer)
Posted by Zana Fauzi at 3:46 PM No comments:

Daily Drop Cap: an illustrative initial every day. (via Design Observer)
Posted by Zana Fauzi at 3:43 PM No comments:

New blog, Friends of Type, a “a sketchbook, an archive, a dialogue” about, yup, type. (via Quipsologies)
Posted by Zana Fauzi at 1:34 PM No comments:

Typornography is an extension of bunnehmunches for you typography wankers.